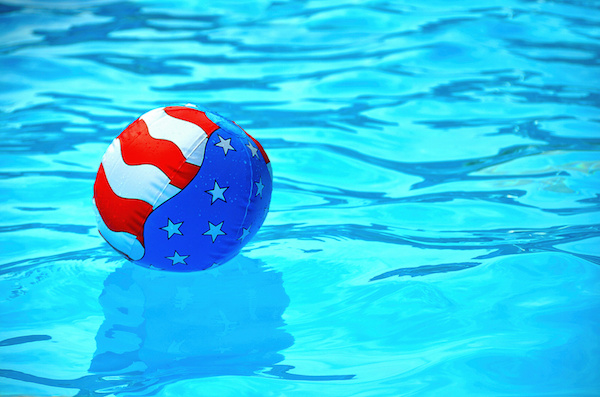 Historians believe that the first pool, known as The Great Bath, was constructed in ancient Pakistan over 5,000 years ago. The Greeks and Romans soon followed suit building pools throughout Europe for bathing, religious ceremonies, and swimming. The modern day pool as we know it didn’t reach the United States until the late 1800s and has had an interesting past in its adoption into American homes and high-end hotels. Though the earliest, ancient pools started out as places of worship or for bathing, today’s pools allow for hours of entertainment, architectural beauty, exercise, and more. Here’s a brief history of how pools became a favorite summer pastime in the hearts of Americans:

Late 1800s: Boston’s Cabot Street Bath opened in 1868 in a densely populated neighborhood where many homes didn’t have baths, allowing poorer families to bathe. The first public pool was built in Massachusetts in 1887 and was used as a great way to socialize and escape the summer heat. One of the first residential pools was built in 1895 at the Vanderbilt estate in Asheville, North Carolina. Many other wealthy families in the U.S. began to build their own pools shortly after, such as the Edisons in 1910. During this time there were no pool contractors, so pools were typically built by road contractors, concrete contractors, and water treatment plant contractors.

Early 1900s: Technology such as chlorine and sand filters were created to treat water, with the first attempt to sterilize a pool with chlorine being at Brown University in 1910. During this time many commercial pools were erected, especially in South Florida where they were at the center of the Art Deco movement. By the end of the 1920s, public pools and baths were common in most US cities.

1930s: It was around this time that hotels started installing swimming pools to attract customers. One of the first was at the Biltmore Estate in Coral Gables, Florida and was the vacation destination of some of Hollywood’s most elite movie stars. Municipalities started building more pools during this time, allowing people to beat the heat.

1940s: It wasn’t until 1940 that pool builders began using gunite, which allowed for pools to be built faster, cheaper, and more creatively. At the end of WWII, the pool industry expanded as families began to settle down and pool builders were able to utilize more efficient technology. The cost-efficiency of gunite, higher family income, and postwar economic boom allowed for many middle class families to build their very own pools. The classic kidney-shaped pool was created during this time.

1950s: During this time, the pool construction industry took off as companies were established throughout Florida, Texas, California, and the midwest. The first one-piece fiberglass pool and the first vinyl-lined swimming pool were both created during this time.

1960s: With low unemployment and a good economy, the boom continued. Technology, construction methods, and equipment improved and many of the pool technologies of today were created, such as PVC plumbing, underwater drains, and pool skimmers. Pool designs also expanded past the kidney shape or rectangle and many became more freefrom.

Late 1900s: At this time the pool industry continued to grow. Pool designs expanded to suit different elevation changes, spacing issues, and landscaping restrictions. Many more natural pool designs emerged, such as the vanishing pool, and technology expanded to make pools easier to operate. Builders began to get input from consumers, many of whom wanted safer, lower maintenance pools, which led to the automatic control systems, automatic cleaners, and pool alarms we have today.

At Aqua Blue Pools, we’re proud to be Brevard’s most experienced full-service pool company. Since the 1960s, we’ve been dedicated to creating backyard vacations for Floridians that will provide years of family memories. To get your dream pool underway, contact us to schedule your free no obligation initial consultation!